Maltese cuisine is often strongly influenced by Italian and French, Provençal, British, Spanish, and other Mediterranean cuisines. For everyone and even indigenous people, when it comes to Maltese cuisine, “healthy, hearty, local, and fresh” are the four words that often come to mind. This has made the Maltese dishes extremely attractive in everyone to enjoy. Going to restaurants in Malta to experience these traditional dishes is a top choice.

However, how about if you own a cookbook containing hundreds of traditional Maltese recipes shared by culinary experts? Maybe it would be better when you can create a delicious Maltese fare yourself and your family, right? Here are 8 Maltese cookbooks representing the island and its rich cultural heritage that we want to share with you.

“This travel-themed cookbook accompanies chef Shane Delia through the six countries in the title, with a section featuring starters, main courses, and desserts from each region.”- Whitney Robinson

Chef Shane Delia takes you to great food from local kitchens in six countries (from Morocco, Malta, and Andalusia in the West, Turkey, Lebanon, and Iran in the East). The book is the result of a journey to find the most exciting local flavors to bring back to his kitchen.

“East/West: A Culinary Journey Through Malta, Lebanon, Iran, Turkey, Morocco, and Andalucia” offers you 80 recipes with hundreds of stunning images. This is a book for foodies, beginners, or anyone who has ever dreamed of making their own culinary journey.

About the author: Shane Delia is an award-winning Australian chef. He is the owner of Maha restaurant and Biggie Smalls Kebab Shop and is the star of the TV show, “Shane Delia’s Spice Journey.” His Lebanese wife, Maha, is the inspiration and the namesake of his restaurant based in Melbourne, Australia. He has a daughter Jayda and a son Jude.

Maltese: Cooking Made Easy: How To Easily Create Maltese Cuisine At Home

“This book has an amazing recipe on every page”- Alex Davis

Maltese cuisine has evolved over millennia in various forms. It can be passed down from generation to generation orally, and with each recipe in this book, you can create your own variations.

In this cookbook, there will be ten traditional Maltese recipes with straightforward instructions and ingredients readily available in most parts of the world.

About the author: Leon Cutajar grew up in Australia and currently resides in Malta, Europe. Apart from his passion for food, he is also keen on cars, engineering, and shaving. Leon Cutajar founded two websites related to shaving to share his knowledge and passion (http://cheapshaves.com and http://straightrazorshave.org).

“Clear instructions. Easy to follow With my favorite recipes”- maz

The idea of this cookbook is to encourage people to cook delicious and healthy in the Maltese way. This book is a collection of Maltese recipes from various sources to bring you a wide selection of tasty food. “Maltese Traditional Recipes: Delicious Maltese Cooking” is an ideal gift for those who grow up without learning to cook Maltese.

About the author: Joseph Vella was born in January 1944 during World War 2 in the town of Valletta in Malta. His family migrated and arrived in Australia in 1952. He was a father of six adult children, a grandfather and great-grandfather.

“This book is incredible. The most comprehensive Maltese cookbook that I have ever seen, a must for every Maltese Household.”- Antoine Zammit

This collection combines recipes from modern-day Malta with immigrants from Malta to the United States and Caruana’s memories of her grandmother’s cooking.

This book presents traditional ingredients and describes Maltese cooking techniques. The author brings several versions of typical Malta dishes, such as the baked rice casserole (Ross fil-Forn) that can be made with cheese, eggs, sausage, ground beef, or a combination of those ingredients. Besides, Caruana will also provide variations when appropriate for items with hard-to-find parts.

About the author: Claudia Caruana is a 2nd generation Maltese and the author of this book. There are three other books of Caruana that you can read:

The Foreign Cinema Cookbook: Recipes and Stories Under the Stars

“This is my new favorite cookbook. Recipes are packed with flavor without being complicated or time-consuming. The chefs know how to get the best out of each ingredient!”- DianeSena

The foreign cinema opened in the Mission District of San Francisco in 1999, and it is the author’s inspiration in turning the neighborhood into a culinary destination. Experience the culinary impression of a sweeping atrium, where movies screen nightly, still captivating visitors after 18 years. Chef Gayle Pirie and John Clark first share the best from their signature North African, California-Mediterranean menu.

With 125 signature dishes, the book offers award-winning favorites from Pirie and Clark, such as Champagne Omelet and Persian Bloody Mary. Also, you will be taught how to blend spice staples like Ras el Hanout. With rich storytelling throughout, the two authors seem to give you and home cooks a chance to bring the restaurant into their own kitchen.

About the author: Gayle Pirie and John Clark are the chefs of Foreign Cinema. Pirie was introduced into Les Dames d’Escoffier International in 2010. The couple lives in Berkeley, California, with their two children.

Cooking in Corktown: A variety of Maltese and other ethnic recipes of Detroit’s oldest neighborhood

“What a great cookbook for a chef or beginner. I really enjoy the many different ethnic recipes and the author’s life experiences he shares about family and friends growing up in the Corktown neighborhood in Detroit.”- Cindy G

This book is a collection of traditional Maltese recipes and other ethnic dishes such as Canadian, Polish, African, Spanish, Cajun, Bosnian, and more.

You will find a lot of delicious and nutritious recipes, with most of them can be made with simple ingredients. It is convenient because the methods in this book can be applied to serve your family any day or even for a dinner party.

About the author: This is Mr. Dennis F Spiteri’s first and only culinary book. The author has included all his knowledge and experience on many regional cuisines in one book to enrich your dining table.

“Traditional Maltese Catholic Lenten Cookbook” includes 45 different recipes that have been consumed during Lent and Easter since the Saint Paul’s Shipwreck in Malta. With a combination of orally passed methods around the world, this is a book that offers mouth-watering recipes for dips, soups, main dishes, desserts, drinks, sweets, and coffee to enjoy. All without meat and can be consumed not only during Lent but throughout the year by health-conscious people.

About the author: Hope and Life Press is the author of this book and also has various types of books with titles such as:

“One of my favorite dessert cookbooks. Beautiful pictures in easy directions. Other things besides desserts too. I can actually see me making everything in this book, unlike other cookbooks where so many recipes are of no interest.”- Judy A

The Cookies & Cups Cookbook is Selly Jaronsky’s first cookbook to share with you recipes from high to deceptively simple. This Cookbook is really a book for everyone, from novice cooks to seasoned chefs.

There are more than 125 no-fail recipes created in a witty, intimate style of the blog that attracts over three million views and social following media of over seven hundred thousand fans. The Cookies & Cup Cookbook is a go-to source of flavorful, accessible, and irresistible recipes.

About the author: Shelly Jaronsky launched her favorite website, Cookies & Cup in 2008 and brought her innovative and delightful recipes in the virtual space. She currently lives in New Jersey with her husband and four sons.

We hope you like this post and finally find out your favorite Maltese cookbooks. Meanwhile, we welcome you to explore our site and discover more cookbook recommendations from the same cuisine below. 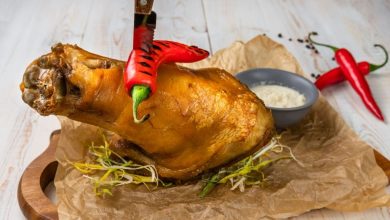 10 Best Welsh Cookbooks For Those Who Want To Try Amazing Authentic Welsh Recipes!